Workplace pensions cost & charges: where are we?

It is now a year since the introduction of new FCA regulations on transaction cost disclosure for workplace pensions. Although there has been good progress in obtaining data, uncertainty remains over the consistency and value of it.

The concerns about the data and the slippage methodology chosen to represent total transaction costs have been felt most acutely through the PRIIPs cost disclosure regime (which also came into force in January 2018).

The extent of the concerns led the FCA to launch a call for input in July 2018 to gather feedback from industry and consumers about their early experiences of the new Key Information Documents (KIDs).

More recently, the European Commission has announced a two-year delay to the extension of the KID to UCITS funds, due in part to ongoing worries about the data.

Although there are differences between the PRIIPs and workplace pension regulations, these teething problems should be treated as an early warning signal for what might be coming for UK DC pensions.

Governance bodies (trustees and IGCs) have been reviewing transaction costs as best they can for some time, but we are only just about to embark on disclosing this information to members through the new illustration and disclosure requirements set down by DWP. This includes publication of cost and charge data on a public website.

Analysis that Redington has undertaken across over 5,500 DC funds shows there is a very wide dispersion of transaction costs as shown in the charts below. This is perhaps not surprising as the slippage methodology includes a random element – market movement – which is likely to be volatile.

However, the more significant story is that the vast majority of the total transaction costs fall within the range of -0.1% to +0.1%, with over 50% being negative. It is still early days, but this initial benchmarking across the main asset classes used by DC investors suggests that there is likely to be few nasty surprises awaiting governance bodies. 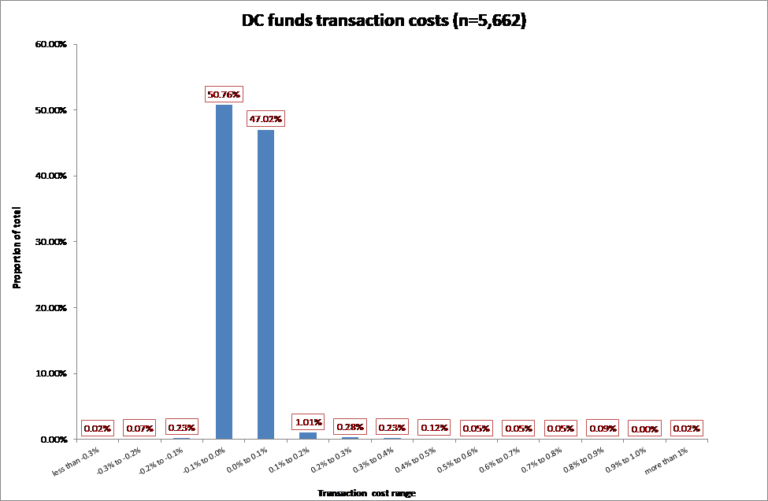 In other developments, the FCA’s Institutional Disclosure Working Group (IDWG) finalised its recommendations and published a report setting out its thoughts on how the industry should move forward.

The main output from IDWG was the publication of cost capture templates which seek to build on other existing industry templates and came with a proposal for voluntary adoption by the industry. The other recommendations included:

We are not, to borrow a well-known phrase from a former British Prime Minister, at the end of the transaction cost and transparency story (or indeed at the beginning of the end).

We may be nearing the end of the beginning, but until governance bodies and investors can both understand, interpret, and be confident in the data presented to them, there is still more work that needs to be done.