Everybody’s talking about Bitcoin – perhaps surprisingly, even the most traditional of multi-asset fund managers. Over the last month it has been a recurring theme in our investment due diligence meetings with most fund managers stating “it’s simply too big to ignore”.

So, should everyone copy Tesla’s recent move and own some Bitcoin?

The new gold: the most consistent argument sighted by our multi-asset managers is that Bitcoin could become an alternative store of wealth to rival gold. Putting aside the fact that similar to gold, “mining” is involved, it shares the same scarcity characteristic – supply is limited to 21 million coins with 90% of these already in circulation. Theoretically this should guard against devaluation pressures that traditional currencies can be exposed to. In a world of relentless central bank printing and record low yields, many of our managers are increasingly looking for assets to diversify their portfolio against a rising threat of inflation. 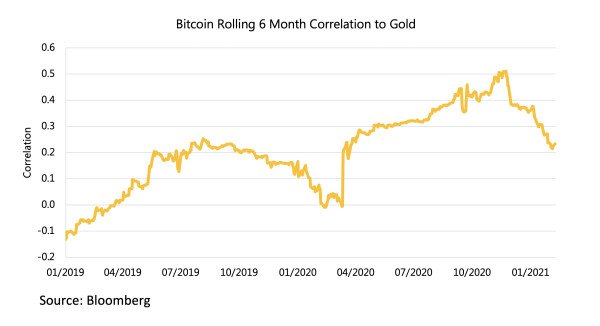 The above chart shows the recent rise in Bitcoin’s correlation to gold. This has led some weight to certain managers’ qualitative argument that going forward, more institutional investors may be encouraged to hold Bitcoin as an inflation hedge in a similar manner to gold.

However, the maths is not anywhere close to being statistically significant, and zooming out below, one can see how this relationship over Bitcoin’s very short lifespan is unclear to say the least. 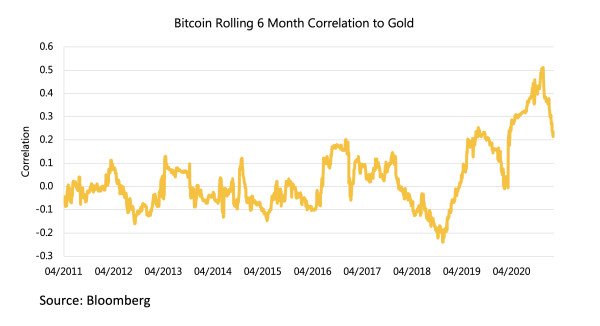 Short-term technical momentum trade: while evidence of fundamental value may be mixed, there is little doubt that Bitcoin pricing has exhibited extreme momentum characteristics over the last 14 months. Some hedge funds have successfully dipped their toe in the water, primarily using Bitcoin futures and systematic signals to ride the wave and capture this risk premia.

Environmental Impact: “The amount of electricity consumed by the Bitcoin network in one year could power all the UK’s tea kettles used to boil water for 27 years.”1

Several of the fund managers exploring the merits of Bitcoin and other cryptocurrencies are especially concerned with the huge amounts of electricity needed to maintain the network. While counterarguments around current and future renewable energy usage are thrown forward, we believe there is a need for far more transparency before one can feel fully comfortable with the associated environmental concerns. 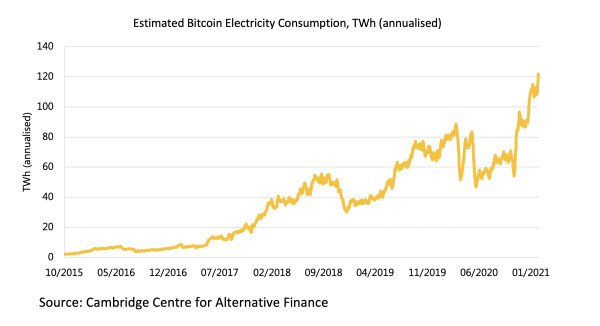 The Cambridge Centre for Alternative Finance estimates that Bitcoin’s electricity consumption has risen so much in the last 4 months that more is used maintaining the network than is used by the entirety of the Netherlands in a year.

Regulatory concerns: fund managers don’t like left tail risks and any potential clampdown on Bitcoin and other cryptocurrencies would likely have highly unpredictable consequences. An ongoing investigation into the cryptocurrency “Tether” in New York is being monitored closely by many institutional investors as are the actions of Treasury Secretary Yellen. It is a case of watch and wait for many funds.

Lack of liquidity and high volatility: the “market cap” of Bitcoin is roughly 5% of that of gold. This makes transacting in any size for these multi £bn funds extremely difficult. In addition, with an annualised volatility of 200% it is too choppy to risk manage on a daily basis. This also makes it tricky maintaining sufficient exposure to move the dial on performance.

Disputed fundamental value and use as a medium of exchange: the majority of managers we have spoken to are in the process of trying to assess a true valuation case for the asset. As a medium of exchange, managers have question marks around its current efficiency in comparison to other digital transfers and ability to replace fiat currencies. There is also debate around its use for illicit activity, though this risk appears to have lessened over time as market participants have become aware that payments are actually permanent, public and traceable.

Implementation routes are unclear: for regulated investment funds in Europe, there are considerable hurdles in purchasing and storing Bitcoin. We expect more and more innovative solutions to hit the market but the lack of permissible access routes is currently holding back many managers.

To conclude, while there is a strong case to explore Bitcoin and other cryptocurrencies as an interesting alternative to other scarce assets, there are currently too many unknowns to see anything other than a very small allocation in your multi-asset fund investment in the near future.

We are comfortable with these multi-asset managers holding small allocations but will be keeping a close eye on developments to ensure that portfolio risk stays under control.