Are you an Amundsen or Scott?

In 1911 two men began ambitious expeditions to the South Pole. Despite facing similar conditions during their 1,400 mile journeys, Roald Amundsen secured victory for his team while Robert Falcon Scott and his team suffered defeat and untimely death. 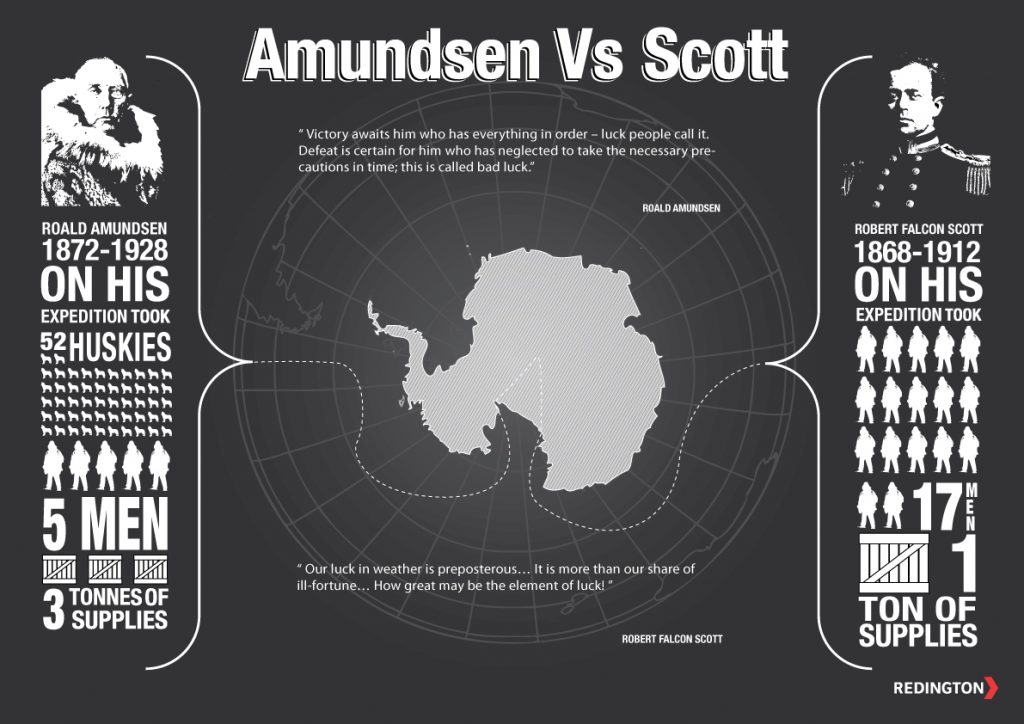 Both men and their teams contended with hostile conditions: freezing temperatures, gale force winds, fierce terrain and no safety nets. Both teams were thousands of miles from help, and without any access to communication. The conditions may have been similar; the two teams’ outcomes were not.
Ultra-low gilt yields, Eurozone and regulatory headwinds, Middle Eastern hostilities and lack of sustainable economic solutions mean that pension schemes face a similarly uncertain and unknown climate.

What lessons can we draw from the past to facilitate pension schemes’ success in this new world? How can they create a more certain outcome in an uncertain economic environment?

Amundsen did not take the task lightly. He spent months training with Eskimos in order to learn key survival skills in the run up to the expedition. He studied the conditions and mapped out the risks. As a result of this research, he began his journey at the Bay of Whales, reducing the distance by 60 miles. He also chose to use dogs instead of modern equipment, knowing that dogs were proven on this terrain (and would be useful as food, if needed!). Given the danger of extreme cold, Amundsen carried four thermometers in case any were broken.

Scott, meanwhile, simply repeated the route of his previous attempt in 1907 with Edmund Shackleton; he started his expedition from the usual spot, McMurdo Sound, and therefore travelled further and tackled tougher terrain. He brought motorised sleds which soon broke as they had never been tested in Polar conditions, and ponies that soon died. Scott was equipped with just one thermometer, which broke shortly into his journey, thus rendering his team ignorant of rapid falls in temperature.

Lessons for Pensions – Following in the footsteps of the successful Amundsen team, a robust Pension Risk Management Framework should be adopted before the journey (to full funding) begins. This involves knowing and quantifying, as much as possible, risks on both the asset and liability side of the pension scheme. Trustees can then map a clear path to meet their ‘Endgame’ strategy whilst minimising the risk placed on the scheme, its members and sponsor.

Amundsen knew exactly how much distance needed to be covered to complete the journey on schedule. He focused his team on travelling between 15 and 20 miles each day, ignoring calls to cover more ground when the weather was fine and to bunker down when the going got tough. “It has been an unpleasant day – storm, drift, and frostbite, but we have advanced 13 miles closer to our goal,” he remarked in his journal. Even when they were within 45 miles of their target and enjoyed pleasant conditions, Amundsen stuck to the plan and travelled just 17 miles. His discipline paid off as the winning team reached the South Pole on 14th December 1911 having averaged 15.5 miles per day! And arriving safely back on the 25th January 1912 as he planned to from the outset.

Scott’s team reached the South Pole on 17th January 1912 but all died on the way back . They lacked the discipline of their rivals, exhausting themselves when the weather was clear and sitting in their tents when conditions were unpleasant. Some days they travelled 45 miles, on others zero. “I doubt if any party could travel in such weather,” Scott wrote in his infamous diary. It was not so much the conditions as exhaustion and hunger to blame for the defeat.

Lessons for Pensions – For many underfunded schemes, a return to 100% funded status in the next couple of years is unlikely. Instead, a realistic target date should be set with asset allocation based on even-more-realistic return assumptions and clearly articulated risk budgets. Should investment returns turn out better than assumed, trustees should not be afraid to ‘bank’ the excess return by allocating to lower risk/lower return assets. De-risking may provide a self-imposed discomfort in the short-term but, in the long-run, it may prove crucial to the survival of both pension scheme and sponsor.

Amundsen did not leave anything to chance. His healthy paranoia meant that his team carried enough food to survive missing a few supply depots. They also placed black stones for a kilometre around the depot, just in case weather conditions threw them off course. This combination of preparation, discipline and paranoia were key to Amundsen’s success.

Scott’s team died, tired and hungry, on the way back within a short distance of a supply depot. Despite taking three times as many men as Amundsen, this group carried one-third the amount of food – not enough to miss even a single supply depot.

Lessons for Pensions – Plan for the best, prepare for the worst. Unknown unknowns are difficult to predict and protect against; however, thanks to advances in financial modelling and quantitative analysis, we can turn some of these into known unknowns. Schemes should stress-test their portfolios against extreme scenarios before any of these scenarios arise. It is far easier to escape the herd before the herd starts stampeding! Moreover, given tighter regulations and plans for central clearing, schemes must carry enough liquid, ‘safe’ assets not only to pay members’ benefits but also to meet collateral and margin requirements.

As Amundsen remarked: “Victory awaits him who has everything in order – luck people call it. Defeat is certain for him who has neglected to take the necessary precautions in time; this is called bad luck.”

So, are you an Amundsen or a Scott?

[Please note that all opinions expressed in this blog are the author’s own and do not constitute investment advice.]